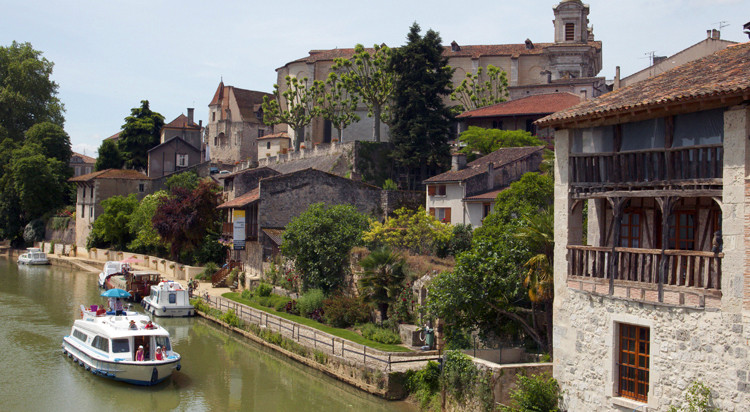 Aquitaine is a nebulous region in south-west France, loosely ranging from the Charente river in the north to the Basque region in the south with Perigord, Gascony, Quercy and Bordeaux in the middle. The rivers Dordogne, Lot and Garonne bisect the countryside and have created rich fertile valleys, scrubby limestone plateaux and rolling moorlands. It is largely a pastoral landscape filled with pretty villages, orchards, forests, vineyards and market gardens. The rich cuisine features duck and goose, but the region is also a big producer of garlic, walnuts, truffles and tobacco, as well as seafood and shellfish along the coast and, of course, the great wines of Bordeaux and the brandies of Cognac and Armagnac.

It boasts two great cities, Toulouse and Bordeaux, which are very different in architecture and culture, but both have impressive historic centres and river walks, and are marvellous places to explore on foot.

Aquitaine’s chequered history is noted for the 100 Years War between England and France, followed by the Wars of Religion, resulting in lots of castles and fortified villages, called bastides. However, it is more renowned for its prehistory as its limestone caves and caverns have revealed some of the oldest human skeletons, as well as tools, ornaments and paintings. La Pech Merle has some of the earliest examples of hand outlines and animal sketches and the famous multi-coloured paintings and engravings in Lascaux can now be experienced at Lascaux IV. This is is the new Centre International d’Art Parietal, which has meticulously reproduced the four caves along with “state-of-the-art experiential storytelling technology”.

Aquitaine has a relatively low population and relatively few tourists, plus a mild balmy climate and a long summer season, so it’s not surprising that many ex-pats have settled there.

English couple, James and Diana, moved to an 18th-century farmhouse in the Quercy region over 25 yrs ago and set up the Walking Party in 1996. With a background in the travel industry and a passion for food, culture and nature, James is the perfect host to introduce you to Aquitaine on gentle walks with a back-up vehicle and donkeys to carry the essentials. As well as walks through the Dordogne and Quercy, they offer leisurely rambles in Catalunya (starting from Barcelona), the Basque Pyrenees (with an excursion to the Guggenheim Museum), along the St James Way between Le Puy and Cahors and in Italy and Suffolk. Plus for truffle enthusiasts there’s a 5 day truffle indulgence leading up to St Valentine’s Day; hunting, cooking and eating the magical black delicacy – 10 to 14 February, 2018.

Ex-pats from Ireland, Wendy and Peter, own and operate the 5 star hotel barge St Louis, cruising the Canal de Garonne. They offer two gastronomic cruises, Gascony and Bordeaux, for private parties of four to six people. The barge has three large en-suite cabins with bath robes and hair dryers, a well stocked open bar, a generous sun deck, a crew of four, a Mercedes minibus for half day excusions and transfers from Bordeaux (or Agen, or Toulouse), and bicycles for independent exploration ashore. As a whole boat charter the itinerary can be ‘themed’ to accommodate your interests, such as wine, cooking, cycling and painting.

The 8 passenger Rosa also cruises the Canal de Garonne and accepts individual bookings. It has two double and two twin cabins with small ensuite bathrooms. Again bicycles are available for independent exploration ashore and the cruise formula is half a day cruising and half a day sightseeing by private minibus. The all-inclusive fares of 3695-4290 Euros per person, share twin, include transfers from Bordeaux, or Toulouse.

For 2019, we have chartered the Rosa for our Taste France 2019 – Aquitaine tours. Tour Two starts with two nights in Bordeaux and an excursion to the Margaux vineyards, then explores the Dordogne, staying in Sarlat for four nights, before joining the Rosa for a six night cruise along the canal that Rick Stein made famous with the BBC’s French Odyssey series. Tour One is fully booked, so the tour departure is guaranteed. It is never too early to start your travel planning ……

While the Canal de Garonne is the only canal in Aquitaine, both the Lot and Charente rivers are navigable and all three waterways offer rental boat holidays. Le Boat has a very good one way route on the canal between Castelsarrasin (near Montauban) and Le Mas d’Agenais (near Marmande) with an optional side trip up the beautiful Baise River. This is a relatively easy route, with automatic locks, that is achievable over a week, but is better suited to 10-14 day rentals if the Baise river is included. Other rental boat companies only have one base for return cruises, except for Locaboat, which has bases at Agen and Valence-sur-Baise.

Low water levels can sometimes be a problem on the Baise River and on the Charente River near Angouleme, but most of the Charente can be cruised most of the time. It’s a very beautiful waterway with the big attraction of the famous cognac houses in Jarnac and Cognac.

The Lot sometimes has the opposite problem of too much water and strong currents. Only a central 74kms stretch is navigable, but it is a dramatic part of the river, including vineyards, Cahors, La Pech Merle and the cliff-clinging village of St Cirq Lapopie.

Aquitaine also offers several self-guided cycling holidays, ranging from the relatively flat tow-path of the Canal de Garonne from Bordeaux to Toulouse, to the rolling coastal terrain between La Rochelle and Bordeaux, to the more demanding hilly routes in the Dordogne. These are 6 to 7 night holidays, but should be extended with extra nights to appreciate the many sights and charms of La Rochelle, Bordeaux, Toulouse and Sarlat. 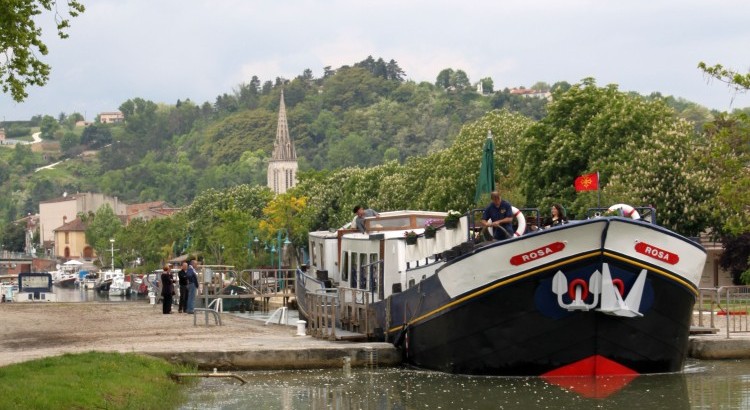 Taste France 2019 offers a relaxed exploration of south-west France from the luxury of the hotel barge ROSA, which Rick Stein made famous when he cruised the Canal de Garonne for the BBC’s French Odyssey series. Rosa is a Dutch Clipper barge, built in 1907 and completely refitted in 2010 to a high specification. Rosa measures 30 m by 5 m and comfortably accommodates eight guests in two double and two twin ensuite cabins.

Taste France tours are designed for independent people, who enjoy travel, good company, good food and wine with the security of an escort to look after the day to day business of travel.

Taste France tours are a mix of organised sightseeing and free time, allowing everyone the opportunity to pursue their own interests and to relax. Half day excursions are offered from the barge, but they are not compulsory so you can relax on board or explore independently. Most meals are included, but some evenings are free, as we know, from years of over-indulgence, that some nights you just want a simple salad or omelette.

Phone or email for your brochure with the daily itineraries, inclusions and terms & conditions.